DCS World Winter 2018 Sale is Here!
At long last, get great savings on the entire library of DCS World products! Lasting until January 7th, 2019, save 50% on most DCS World modules! This applies to aircraft, maps, and campaigns.

The only exceptions include:

Note: the sale only applies to released products.

Get these deals in the DCS e-shop

Want an Eagle Dynamics DCS module for free? Here is your chance! Just Share the following post on your Facebook page and you will be automatically entered in the drawing on January 7th, 2019. We will randomly select 10 winners to receive any currently available Eagle Dynamics module.

We are pleased to update our first Warbird for DCS World, the Mustang! This week’s update includes both a complete overhaul of the cockpit to include deferred shading and physical based rendering technology, as well as a more detailed 3D model and textures.

In addition to a huge update to the cockpit, we have also greatly improved the external model and added the option to fly the P-51D-25-NA version. This was the most common P-51D for the European Theater of Operations (ETO) with its primary difference being its radio and IFF systems. This is most visible by the dorsal antenna.

As notes in prervious newsletters, both the Bf 109 K-4 and Fw 190 D-9 have also gotten outstanding improvements to their cockpits and external models to bring it to DCS World 2.5 standards.

With the huge updates to the P-51D, Fw 190 D-9, and Bf 109 K04, and all the time and resources invested, the price of each warbird will return to $49.99; however, all three aircraft will take part in our Winter 2018 sale. These are free updates to existing owners.

These are free updates to existing owners.

We also have a new and exciting World War II map in development.

Developed by Reflected Simulations, this campaign is the perfect setting to fly the newly updated Mustang! 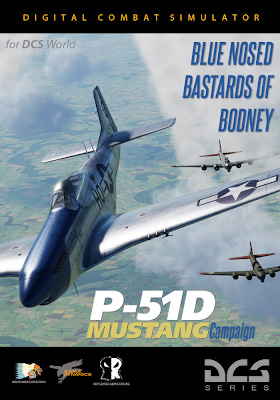 Become a member of the most famous fighter unit of the USAAF, take part in escorting large bomber formations, support the ground troops after D-day, or engage the Luftwaffe over the snowy hills of the Ardennes. The Blue Nosed Bastards of Bodney is a semi-historical campaign for the P-51D Mustang. It follows the 352nd Fighter Group from May 1944 through the Normandy landings until Operation Bodenplatte in January 1945. This campaign has a plethora of details and Easter eggs to make you feel like a young American flyboy in the Army Air Forces in 1944.

This week, AvioDev is proud to make available the Enhanced Flight Model (EFM) for their C-101EB version and launch the more-weaponized C-101CC version.

DCS: C-101 Aviojet module includes both the C-101EB and C-101CC models. The C-101EB model is the primary jet trainer and aerobatic display aircraft of the Spanish Air Force, whilst the C-101CC model, with its 7 hard-points and uprated engine, is a versatile light attack aircraft that has seen combat with the Honduras Air Force against drug traffickers. It is also in service with the Jordanian and Chilean air forces. The two models of the C-101 have many similarities that include cockpit layout, core-systems operation, and aerodynamic design. This commonality brings something for everyone to include lead-in jet training, advanced aerobatics, and light attack.

This week we updated the Open Beta from 2.5.3 to 2.5.4. Highlights of this Open Beta update include: