Pre-purchase and save $10 from

The DCS: F-14 Tomcat by Heatblur Simulations is now available for pre-purchase with a $10 discount. Early Access release of a feature-complete F-14B will be this winter.

The Grumman F-14 Tomcat was a two-crew, variable geometry, maritime air superiority fighter that served with the US Navy for 32 years and continues to serve with the IRIAF in Iran. The F-14 was the US Navy’s frontline fighter from the 1970s until the mid-2000s. Over the course of its long service life it also became the US Navy’s premier precision ground-attack platform and lone airborne reconnaissance asset. 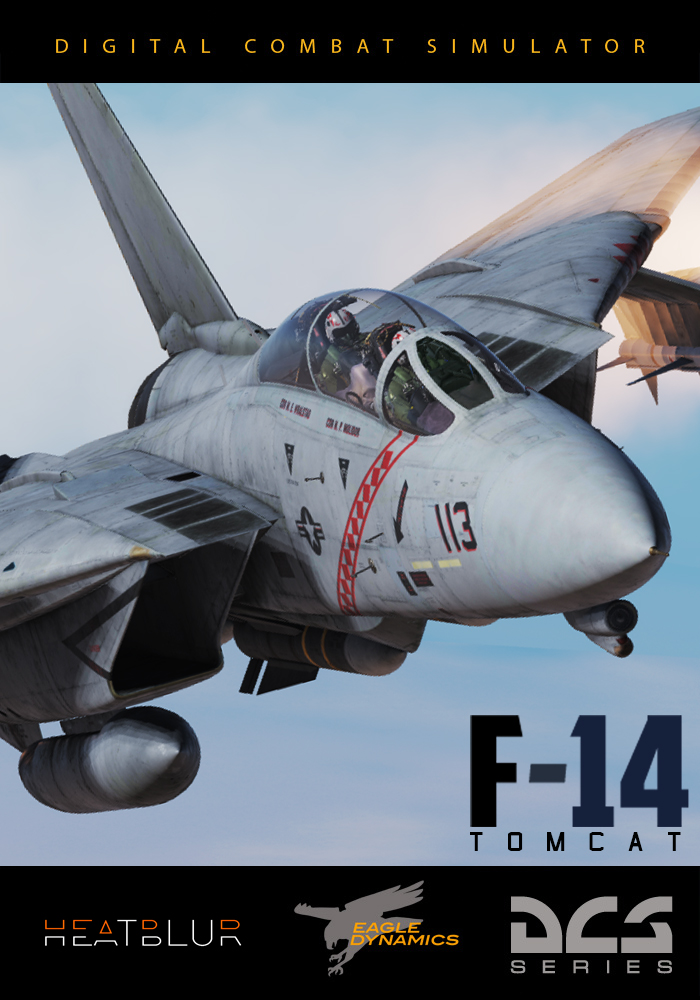 Outstanding features of the aircraft are the swing-wing configuration, crew of two, and the powerful AN/AWG-9 Weapons Control System (WCS) and radar. The AWG-9 allows employment of the powerful AIM-54 Phoenix air to air missile while the LANTIRN pod allows the ability to carry out precision ground strikes using laser guided bombs. The F-14 Tomcat was present during many pivotal historic moments such as the two Gulf of Sidra incidents, Operation Desert storm in Iraq, the conflict in Yugoslavia, Operation Enduring Freedom in Afghanistan and Operation Iraqi Freedom. It was also immortalized in the iconic motion picture, Top Gun, and starred in several other feature films including The Final Countdown, Executive Decision, and others.

In addition, the Tomcat was also a vital player in the Iran-Iraq war during the 80s, flying for the Islamic Republic of Iran Air Force which had acquired the F-14A from the US prior the Islamic Revolution of 1979.

The Heatblur Simulations F-14A/B Tomcat aims to simulate this iconic aircraft as a high-fidelity module for DCS, being the culmination of several years of research, coding and modelling.

Special points of consideration amongst the many features are the external and internal graphic model created using laser scanning and photogrammetry from real Tomcats at various museums, the detailed modelling of the AN/AWG-9 and the ability to fly as a two-crew aircraft in multiplayer.

MiG-29 for DCS World Available Now
This is a free update for Flaming Cliffs 3 customer, or a separate purchase option from DCS e-shop

This week we bring you the long-awaited update to the MiG-29A, MiG-29S, and MiG-29G! This is the last of the major updates to DCS: Flaming Cliffs 3 (FC3) line of aircraft. As with the other updated FC3 aircraft, the MiG-29 now incorporates a Professional Flight Model (PFM) that will continue to undergo development and improvement during the early access period.

Additionally, the MiG-29 cockpit and external model have been greatly improved, and other changes have been made like:

The MiG-29 ”Fulcrum” is a Russian-designed, twin-engine, supersonic fighter. First operational in the early 1980s, the Fulcrum is a ”light weight” fighter, comparable to the American F/A-18 Hornet and F-16. Designed to work in conjunction with the larger Su-27 Flanker, the MiG-29 is armed with an internal 30mm cannon and both infrared- and radar-guided air-to-air missiles. For air-to-ground tasks, the MiG-29 can be armed with a large array of unguided bombs and rockets.

In addition to a sophisticated pulse doppler radar, the MiG-29 is also equipped with a passive Infrared Search and Track (IRST) sensor that allows the Fulcrum to detect and target enemy aircraft just based on their infrared emissions. This allows the MiG-29 to make stealthy attacks with no warning!

The Fulcrum is a highly-maneuverable fighter in a dogfight, and when paired with the helmet mounted sight and the AA-11 ”Archer” air-to-air missile, it is a very lethal adversary.
The MiG-29 has also been widely exported and has served in many countries that include Germany, Iran, Ukraine, and Poland.

Key Features of the MiG-29 for DCS World:

Note: The MiG-29 for DCS World is identical to the MiG-29 in Flaming Cliffs 3. Owners of FC3 do not need to purchase. 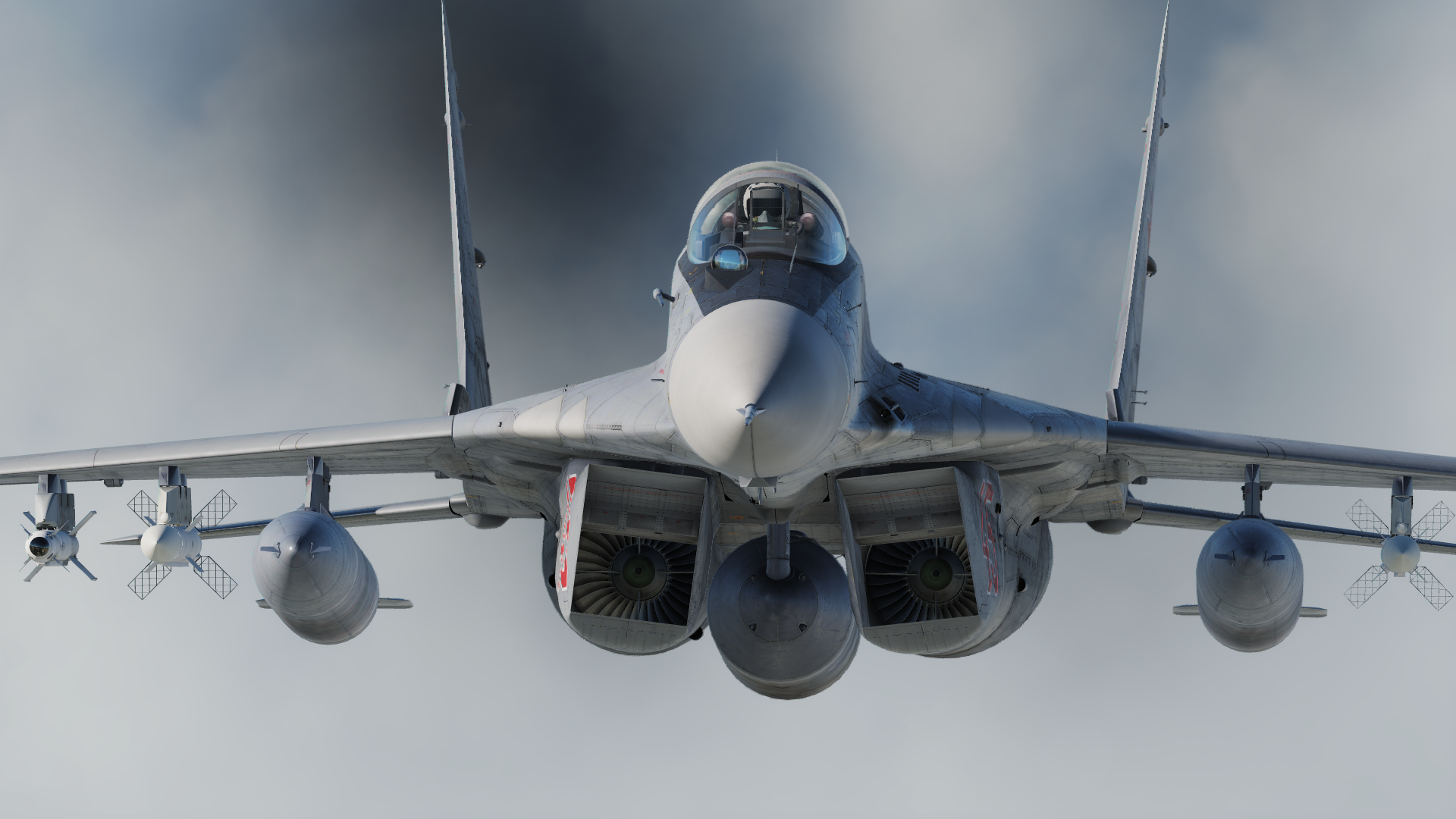 The main differences in the new PFM against SFM MiG-29
SFM had very basic stability/controllability model, where stick deflection defines required g-load (1 g auto-trim system).
In real life, the MiG-29 is a plane with natural positive stability without any g-load feedback (as Su-27, for example) with additional longitudinal stability augmentation system (LSAS) and dampers.
MiG-29 PFM carefully models real plane longitudinal stability and controllability characteristics of the plane itself as well as LSAS algorithms.
Lateral and directional stability and controllability were tuned as well.
The true effect from leading edge slats was added.
To model the distinctive features of the plane aeroelasticity effect were added for ailerons together with the limited ability of the actuators.
Roll rate is dependent on AoA and dynamic pressure and is very close to the real prototype.
The plane has a very pronounced effect of ground proximity to its longitudinal controllability, which is modelled.
Stick limiter algorithm is fundamentally changed in comparison to SFM to have it like the real thing.
Autopilot modes are made closer to the real.

You can read the complete change log on the DCS forum

We are on track to have the JHMCS with AIM-9X, FPAS page, fixed antenna logic, and AGM-65E and AGM-65F for the Hornet by the end of this month. In parallel, the HARM and ATFLIR pod are being developed, but these are complex tasks and will take longer.

For those that already own the Su-33 as part of Flaming Cliffs 3 or the stand-alone Su-33 for DCS World, this bundle pack is for you.

Please find the offer on our e-Shop

Persian Gulf Blue Flag Event
We are proud to announce our participation in the next official event for Blue Flag: Persian Gulf! We have continued to add to and optimize the DCS: Persian Gulf map, and it’s now ready for its first official Blue Flag event.

We will be making a free Eagle Dynamics module available to the Most Valuable Player (MVP) of each coalition. We and our friends at the Buddyspike team are working tirelessly to bring you more and more features, improved game play, and an even better multiplayer dynamic simulation.

Players are pitted against each other in a battle to control the region with over 50 airfields and FARPs to capture along with carriers to defend and attack – this will be the biggest BlueFlag yet!

The official round will be starting October 19th at 18:00 UTC and progress can be followed live on the BuddySpike Gadget available here along with more information about the Online Persistent Dynamic Campaign. The round will run for two weeks with victory handed to the coalition holding the most bases at the end of the round – or if the map is entirely conquered. To register for your coalition – just join the BlueFlag PG server and type Red or Blue in the DCS Chat. See you in the Skies!