The F110 was selected to replace the F-14A’s ailing TF30 for two primary reasons; its significant increase in thrust, and its greatly increased reliability.
While the F110’s operation can be described as extremely reliable, the focus of this update will be on its implemented failure modes and off-nominal operations.

Heatblur’s F110 will feature an extensive library of failure modes and degraded operation, ranging from slow oil leaks all the way to engine fires.

Below is an overview and list of implemented failures that will come with the F-14B in early access:

The oil system is a series of pumps and reservoirs that keeps the engine lubricated. This is especially critical in turbomachinery where rpms are very high. Oil pressure is also used to operate secondary systems, such as the variable exhaust nozzle.

Overpressure situations are most likely to occur in cold weather conditions when oil viscosity is higher. Oil pressure is primarily affected by core rpm, but when the oil is cold, temperature can play a significant role. Unloading the aircraft may result in low oil pressures as the scavenge pumps cannot operate effectively. Stay alert for oil pressures below about 20 PSI, as this may signal a problem and getting down should become a priority. Watch for oil pressures above 65 PSI when starting on a cold day, and ensure oil has had sufficient time to warm before increasing engine rpms to takeoff power.

Sustained oil pressures above 65 PSI can potentially cause oil leaks if left unaddressed. Eventually if the engine oil depletes, expect to see engine oil temperature increase (resulting in an OIL HOT caution light) and pressure decrease (OIL PRESS lgiht), and eventually engine seizure if the engine operates too long without oil. Engine oil quantity is not available as an indication in the cockpit, so the instrument panels oil pressure gauges may be your only cue that an oil leak has occurred. By the time the caution lights illuminate you may only have a few minutes of flying time left at higher rpms.

Compressor stalls are events in which the compressor blades stall and can no longer effectively compress incoming air and force it onto the next stage of the engine. When this happens, higher pressure air downstream of the stall can reverse flow directions. Those of you familiar with other aircraft prone to these events are likely familiar with some of their signs and characteristics. Our new engine model goes greatly in depth in the simulation of compressor instability type events, in particular:

Inlet buzz is a cyclic phenomenon that occurs when flow instabilities cause the shockwave to move in and out of the inlet cowl lip. This scenario is mostly likely to occur in a few situations: supersonic speeds and low power settings in SEC mode (fixed IGV positions), unloading the aircraft at supersonic speeds in SEC mode, and loss of mach signal from CADC in any AFTC mode. Inlet buzz can result in severe buffeting (+2.5/-1g @ 6Hz), but is not catastrophic and can be easily corrected and avoided.

Pop stalls can occur in a few specific scenarios, but are generally harmless. A slight increase in EGT may be seen, but the most noticeable indiciation from the cockpit will be a loud bang. Pop stalls generally do not result in a loss of thrust or engine damage.

Full stalls or surges are the most severe form of compressor malfunction. These events involve flow disruptions within the core itself, with numerous resulting effects. Engines require constant airflow, primarily to generate thrust, but also to regulate EGT (constant supply of “cool” air from the compressor regulates this) and drive the compressor via the turbine section. If this airflow is disrupted, thrust loss, increased EGT, AB blowout, and N1/N2 rollback will occur.

A stall event will be very noticeable from the cockpit and will be accompanied by very loud bangs. Pilots experiencing compressor stalls often believe that there has been an explosion on board before realizing what happened. In extreme cases, the high pressure/temperature gasses in the latter stage compressor and combustor may change flow direction completely, with very loud bangs and even flames coming out the inlet. This can result in damage to the compressor itself or the inlet guide vane linkages. Stalls can also be detected by the FEMS circuit, and a STALL light will illuminate (this is not available in SEC mode).

A high speed spool seizure will result in the compressor spool coming to a stop. This event should only occur via loss of oil pressure or battle damage. The engine will cease to function when this occurs, but the low speed (fan/N1) spool will continue to windmill.

A low speed spool seizure will result in the fan spool coming to a stop. This event should only occur via loss of oil pressure or battle damage. The engine will continue to function when this occurs as the core can still spin, but airflow and thrust will be reduced.

Turbine damage can occur if EGT limits are exceeded. While the turbine can handle brief periods of over-temp, sustained over-temp will degrade performance and can eventually lead to complete failure of the turbine. When this occurs, the turbine can no longer provide the torque needed to keep the compressor spinning.

Turbine damage can occur if EGT limits are exceeded. While the turbine can handle brief periods of over-temp, sustained over-temp will degrade performance and can eventually lead to complete failure of the turbine. When this occurs, the turbine can no longer provide the torque needed to keep the fan spinning.

Engine fires will mainly be the result of battle damage. Engine fires are detected by a series of thermocouples in the engine compartment and fire detection will be accompanied by a FIRE caution light. If they are not extinguished, complete engine failure will occur, with likely loss of the airframe as well.

Engine overspeed event should be very rare, mainly a result of battle damage. Overspeeds are likely to be caused by broken throttle linkages or fuel valves stuck full open. The AFTC provides automatic engine shutdown via fuel cutoff if core speeds exceed 110.5%. Once an automatic shutdown has occurred, the AFTC can be reset by moving the throttle to the shut off position and back to idle. At this point, an engine restart may be attempted.

AFTC PRI mode should be extremely reliable, but the AFTC can revert to SEC mode in a number of situations. Once in SEC mode, features such as EGT over-temp protection, N1/N2 overspeed governing, AB operation, stall detection, exhaust nozzle scheduling, and inlet guide vane scheduling are lost. An ENG SEC caution light will indicate this condition. The AICS ramp schedule also reverts to a degraded mode.

This will result in lower overall engine stability and some loss of thrust, but SEC mode operation is very reliable and will ensure you can return to the boat.

The AICS ramps are scheduled to provide the correct quantity and quality of airflow to the engine during all phases of flight.
This is incredibly important in an aircraft such as the F-14, which encounters a high variability of flight regimes and parameters.

Fail Open: AICS ramps are scheduled to deploy from their stowed position based on mach number. If the ramps fail to move from their stowed position, the inlet’s pressure recovery efficiency will suffer, resulting in decreased thrust and stability margins, potentially leading to compressor stall. Flying subsonic should mitigate any potential issues.

Fail Closed: This failure has notably occurred in real life, primarily being an issue on cat shots at takeoff power when the ramps drop from their stowed positions at low speed. The dropping of the ramps results in impeded airflow when the engine needs it the most, resulting in severe loss of thrust and compressor stalls. Fortunately, this should be very rare.

Cat shots should be done with the AICS ramps in STOW, ensuring the ramps are locked in their stowed position and do not drop unexpectedly!

Fail in Position: Exactly as is sounds, the ramps fail in position. If the failure occurs at high mach number, this can lead to the ramps being stuck deployed when they shouldn’t be. Selecting ramps to STOW should allow the airflow to blow the ramps back to a nearly stowed position.

The variable exhaust nozzle is responsible for controlling nozzle throat area to control massflow and exhaust exit velocities, as well as regulating engine exhaust backpressure and therefore can affect engine stability.
The nozzle is almost fully closed during non-AB operation, and only modulates open during AB operation to control backpressure and stability when large amounts of fuel are being dumped into the tailpipe.

Flame Out: Flame out can be caused by improper fuel/air ratio within the combustor, but should be rare due to the F110’s automatic ignition system. 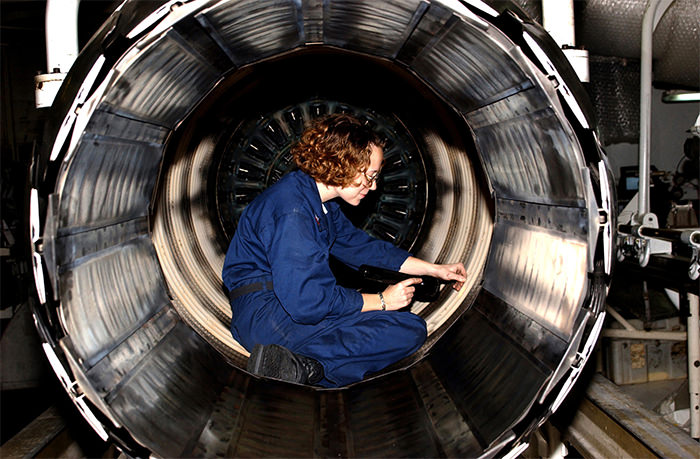 Off Nominal Operations (The Engines and You!)

Importantly for the pilot and aircraft, a result of some of the above failures may require corrective actions or off-nominal operations to bring the engines back from a failure. In rare scenarios such as a flame out or overspeed resulting in a shutdown, the engine may need to be started in-air.

Off nominal operations are really where the intricacies of our engine modeling will interact directly with the player.
Your decisionmaking will have a big impact on your continued virtual existence.

The following off-nominal operations have been modeled for Heatblur’s F110:

Cross-starts may only be performed if one engine is already running and bleed air is available. This is an abnormal operation since most engine starts are done via ground cart, but they can also be performed in the air without the need to dive at 450+ KIAS as required by windmill starts.

Lastly, some final additions have been made to complete the functionality of the AFTC detailed in the previous Engine update:

This system is designed to limit high asymmetric thrust situations when one AB has been lit but the other has not. Due to the large lateral distance between each engine, large and undesirable yaw moments can occur at maximum thrust, resulting in spin tendences to develop. The limiter holds the lit AB in a minimum fuel state until an AB flame has been detected on the opposite engine.

RATS is intended to reduce wear on carrier arrestment systems, and reduces max engine core speed by 4.5% when the weight on wheels switch is closed and the arresting hook is deployed. RATS is disabled when in AB or SEC mode, but the light will remain illuminated if the system is armed regardless of mode/active status.

With the additions of these failure state simulations and the completion of the AFTC, the development of our advanced engine model for the F110-GE-400 is beginning to reach an end.

We will be continuing to iterate upon our new engine framework through the development of other similar jet engines, such as the P&W TF30 for the F-14A and other engines for unannounced projects.

Hope you enjoyed going in-depth on the engines you’ll be riding shortly.
Thanks for the support!